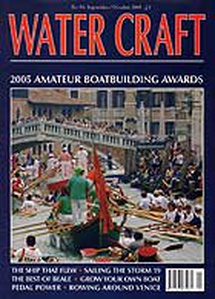 For our SEPTEMBER/OCTOBER 2005 issue, we welcomed a GUEST ARTISTE ­ while Water Craft's regular Art Man, Peter Goad, spent the summer lazing at the Porth Navas Yacht Club, graphic designer LOO HILLIER manfully drove our Big Mac... Here's what she designed: They say that sails in Wales are usually when it hails, so what better place to look for THE PERFECT STORM? Matt and Nick Newland of Swallowboats have done their jaunty double-ended Storm dayboat at 15' (4.6m) and 17' (5.2m) and now there's a 19' (5.8m) version, which Judy Brickhill sailed...... in Wales. HOW WAS IT FOR YOU? The spring boat show near Pangbourne has re-invented itself as the BEALE PARK THAMES BOAT SHOW but that doesn't mean it's now all about floating caravans nose-to-tailing up and down the river, says Pete Greenfield. And don't tell him that when it comes to backyard boatbuilding THE LABOUR AND THE WOUNDS ARE VAIN. He wants you all to join in with his hymn of praise to the entrants in Water Craft's AMATEUR BOATBUILDING AWARDS 2005. Talking of backyard boatbuilders... THE SHIP THAT FLEW is a classic children's book by Hilda Lewis about a model Viking ship which grows to full size and... But backyard boatbuilder David Jones had not even read it when he decided he needed to lift his own miniature longship right over his house. LA VOGALONGA ­ no, not the Velalonga, that's the race under sail on the Venetian lagoon, which we featured in W52. This is the Vogalonga which happens one week later and is a race through the canals of Venice under oar for every kind of rowing boat you can think of, from Gondolas to Cornish gigs and American whaleboats. Kathy Mansfield was there with her camera. GROW YOUR OWN BOAT Steve Graham visits a course where you can build a traditional Irish currach from grown hazel 'wands', timber from a demolition contractor's skip and old bedspreads from the local charity shop. And you thought you couldn't afford to build your own boat! PLUS... GRAND DESIGNS ­ this time featuring a fast and fascinating pedal-powered river skiff created by.... Nick and Matt Newland of Swallowboats. AND TOOLS ON TEST, GEAR, DESIGNING YOUR OWN BOAT, BEAUTIFUL PEAGREEN BOATS... BUT NOT FORGETTING OUR PREVIEW OF THE SOUTHAMPTON BOAT SHOW, featuring a brand new wooden pilot cutter under construction and a new GRP double-ended dayboat... called Storm.... from Matt and Nick Newland of Swallowboats. (What the hell: they've had so many plugs already, you may as well go to www.swallowboats.com)